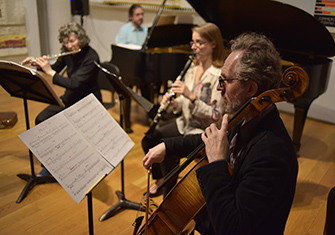 Collide-O-Scope Music, a new music ensemble with a focus on diverse and innovative music forms, will perform at William Paterson University in Wayne on Monday, September 23, 2019 as part of the University’s 2019-20 New Music Series. The concert begins at 7 p.m. in the Shea Center for Performing Arts on campus. Admission is free.

The program will feature a wide range of 20th and 21st century music, including “Only Human” (2005), a work by John Link, professor of music at William Paterson University. Other works include Alban Berg’s 4 Pieces for Clarinet and Piano, Opus 5 (1913), “Mists” (1981) by Iannis Xenakis; “the birds are nervous, the birds have scattered” (2008) by Sean Shepherd, and Milton Babbitt’s “The Old Order Changeth” (1998). Performers include Augustus Arnone, piano; Maja Cerar, violin; and Marianne Gythfeldt, clarinet.

Led by artistic director Augustus Arnone, Collide-O-Scope Music is now in its 10th season of offering an eclectic mix of newly composed works and essential classics from the modern repertory. Dedicated to the performance of new musical compositions, the ensemble has commissioned new works from numerous composers. In addition, the group has experimented with innovative approaches to the concert program itself in the form of immersive productions where fixed compositions give way to episodes of interactive improvisatory music in seamless sets of continuous music.  Its debut album, Eidos, was released in November 2018.

For additional information, contact the Shea Center Box Office at 973.720-2371 or visit wpunj.edu/wppresents.