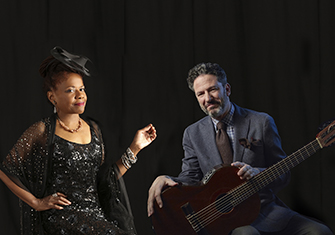 Guitarist John Pizzarelli and vocalist Catherine Russell, in a program featuring the music of Nat King Cole and other legends such as Billie Holiday and Ella Fitzgerald, are among the wide variety of jazz artists featured during the fall 2019 season of The Jazz Room at William Paterson University in Wayne.

Trio Da Paz kicks off the season on October 13. The series continues with a performance by saxophonists Vincent Herring and Eric Alexander and their Quintet on October 27, followed by the Carl Allen Quartet performing a tribute to drum legends Art Blakey and Elvin Jones. New York Voices joins the WP Jazz Orchestra directed by David Demsey on November 17, and violinist Daisy Castro presents an afternoon of high-energy gypsy swing on November 24. Pizzarelli and Russell conclude the fall Jazz Room season on December 15. All concerts are held at 4 p.m. in the Shea Center for Performing Arts on campus.

Saxophonists Eric Alexander and Vincent Herring, two great performers of the post-bop tradition, bring a quintet to the Jazz Room on October 27. Herring is a veteran of bands led by Lionel Hampton, Nat Adderley, Horace Silver, Art Blakey, Freddie Hubbard, Cedar Walton and many others; Alexander is a mainstay in New York jazz clubs and at festivals worldwide, is an ongoing collaborator with his former teacher and mentor, pianist Harold Mabern, and has appeared on over 90 CDs as a guest artist.  Both have deep William Paterson connections—Herring as a member of the jazz faculty since 2006, and Alexander as one of the best-known alumni of the University’s jazz studies program.

Internationally respected drummer and William Paterson alumnus Carl Allen returns to his alma mater with his quartet for “The Art of Elvin,” a tribute to two of his mentors, drum legends Art Blakey and Elvin Jones, on November 10.  Allen has built a major career leading his own bands and appearing with numerous influential jazz performers, as well as collaborating with Michael and Randy Brecker, Benny Golson, J.J. Johnson, Wayne Shorter, Herbie Hancock, Cyrus Chestnut, Benny Green, Billy Childs and many others.  His direct connection to Elvin Jones and to Blakey will be the inspiration for this powerful performance.

The multitalented New York Voices, celebrating their 30th year as one of today’s premiere jazz vocal groups with styles ranging from doo-wop to swing to modern jazz, performs with the WP Jazz Orchestra directed by David Demsey on November 17.  The concert will feature the Voices foursome—Kim Nazarian, Darmon Meader, Lauren Kinhan, and Peter Eldridge—in collaboration with the talented students of William Paterson’s 18-piece Jazz Orchestra, with exciting performances of Meader’s arrangements of standards and big band hits.

On November 24, the young violinist Daisy Castro, who has grown to become a major part of gypsy jazz music worldwide, brings her talents to the Jazz Room stage. Her debut CD Gypsy Moth was released at age 13, and she has been appearing on the world’s stages since then, appearing with violinist Mark O’Connor, guitarist Howard Alden, and many more.  Her high-energy gypsy swing will certainly make a wonderful impression in her first Jazz Room performance.

Inspired by Nat King Cole’s TV show, the all-star duo of John Pizzarelli and Catherine Russell pay homage to Cole and his talented guests on December 15. Russell is back by popular demand, and John Pizzarelli shares a deep connection to William Paterson with his father, historic jazz guitarist Bucky Pizzarelli.  Pizzarelli, who recently released a Nat King Cole tribute album, and Russell will perform Cole’s most memorable hits, as well as timeless works by Billie Holiday, Ella Fitzgerald, and other ladies of song.

William Paterson University’s Jazz Room series, now in its 42nd season, is the longest-running program of its kind in the United States. Launched in 1978, the Jazz Room has welcomed more than 500 jazz legends to the stage, including Sonny Rollins, Wynton Marsalis, Wayne Shorter, Joe Williams, Marian McPartland, Slide Hampton, Kenny Burrell, Joe Lovano, Kenny Garrett, Clark Terry, Michael and Randy Brecker, the Vanguard Orchestra, and more. Concerts have encompassed the entire spectrum of jazz, from early jazz and swing to avant garde, and from intimate solo performances to big bands. The performance series provides support for the University’s internationally renowned Jazz Studies Program, founded in 1973, which draws students from across the United States and abroad under the current direction of pianist Bill Charlap.

All performances take place in the Shea Center for Performing Arts on campus at 4 p.m. The concerts are preceded by “Sittin’ In,” informal jazz talks with the afternoon’s artists, at 3 p.m. in Shea Center 101, which are free to all Jazz Room ticketholders. Sunday afternoon concerts begin with a performance by a William Paterson student jazz ensemble.

The Jazz Room at William Paterson University has been made possible, in part, by funds from the New Jersey State Council on the Arts, a partner agency of the National Endowment for the Arts.