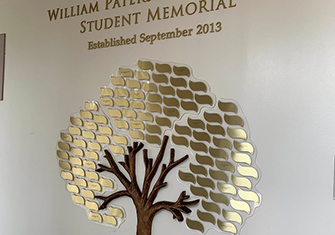 The University recently established a memorial in the Cheng Library, along the wall leading to the Auditorium. The memorial commemorates students who died while enrolled at the University, beginning in fall 2013 when recordkeeping was formalized.

“We can take some measure of solace in knowing that these students made a lasting difference during their time here at William Paterson – through the friends they made, the faculty they studied under, and all the others who were fortunate enough to be a part of their lives,” said President Richard J. Helldober, in his remarks at the unveiling ceremony in October.” “As our memorial to them says, ‘A life that touches others goes on forever.’”

“Loss is always difficult and at a university, the loss of a student is particularly painful. This memorial provides us a more tangible and lasting way to recognize and honor these students,” says Miki Cammarata, vice president for Student Development.

Each of the following 17 students has their name engraved on a leaf: