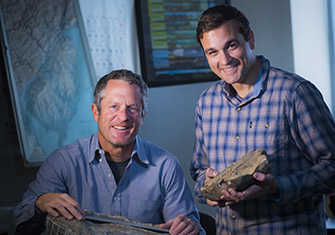 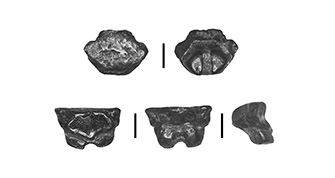 View NJ.com Story: How an Unlikely N.J. Duo Made a 60-Million-Year-Old Discovery

Harry Maisch IV, PhD, adjunct professor of environmental science at William Paterson University, has discovered teeth belonging to a new species of fossil stingray in southwest Arkansas. The specimens date back about 60 million years, a very important time in geologic history: right after the mass extinction of dinosaurs. Maisch wrote an article on his discovery, published this week in the internationally recognized Journal of Paleontology.

Maisch unearthed the fossil stingray teeth while conducting fieldwork with Becker on a dry piece of land near Malvern, Arkansas. Millions of years ago, that now-dry land right beside a highway was likely covered by the Gulf of Mexico, currently located about 350 miles away, Maisch notes. He collected various vertebrate fossils and brought them back to the lab for further examination.

“As I was extracting and classifying all the fossil vertebrates, I found teeth that I knew belonged to a stingray, but I didn’t know what species,” Maisch explains. After much research and a behind-the-scenes tour of fossil collections at the American Museum of Natural History in New York City, Maisch realized the fossil stingray teeth he found, measuring just over 2 millimeters each, were unlike any of the four fossil species previously identified.

The other four species were found on the west coast of Africa and central New Jersey between 1910 and 1996. The identification of Hypolophites beckeri in Arkansas, gives us many clues about how Earth and its species evolved, Maisch explains. “The geographic distribution of stingrays from Africa to the United States tells us that these land masses were once closer together, allowing these animals to swim between them, and attests to a uniformity of marine shelves between those areas,” Maisch says.

Several undergraduate students pursuing degrees in environmental science at William Paterson University have been a big part of the professor’s discovery, he notes. “The lab work related to this project included going through the sediments I collected in the field, helping to sort the fossil collection, and examining different species under the microscope. It’s always great to involve undergraduates in these types of supervised research experiences,” Maisch says.

It was during his own undergraduate career at Rutgers University about a decade ago that Maisch developed an interest in Becker’s research at WP. “I decided to send him an email, and he’s been my mentor and friend ever since,” he says. In 2017, Maisch was hired as an adjunct professor at the university Becker has called home since 2006. In 2018, Maisch earned his PhD from the City University of New York (CUNY) Graduate Center.

Maisch is looking forward to this spring, when the best quality Hypolophites beckeri teeth will find their new home in the vertebrate paleontology collection at the Academy of Natural Sciences of Drexel University in Philadelphia, PA, the oldest natural history museum in the United States.

“I’ve been working in this line of research for more than 35 years, so this is an honor,” says Becker, about the newly discovered fossil bearing his name. “Long after I’m part of the fossil record, beckeri will live on,” he jokes.

“They always say gold is where you find it,” Becker continues. “This was the right time in geologic time with the right geologic exposure. And in the end, you got the right guy on the job – Harry Maisch – to make this discovery.”