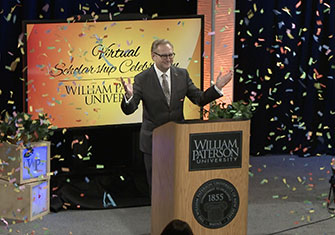 William Paterson University celebrated the highly successful conclusion to its Campaign for Scholarships—raising more than $16 million, exceeding the original goal of $10 million by 60 percent.

Many students have benefitted—and will continue to benefit—from the generous contributions by members of the William Paterson University community to the Campaign for Scholarships, which concluded on June 30, 2020.

“We could not have done this without the support of so many generous supporters,” says President Helldobler. “Scholarship support makes a profound difference in the lives of students for whom a college education is truly a game changer. I thank everyone who donated to our campaign for their commitment to William Paterson University, our mission, and our students. They are truly the best investment we, as individuals and as a society, can make.”

The campaign, initiated by President Emerita Kathleen Waldron and brought to a successful conclusion under the leadership of President Richard Helldobler, was celebrated at the University’s recent virtual scholarship celebration.

The campaign launched in 2015 with a lead $1 million grant from The Henry and Marilyn Taub Foundation, and generated support from 4,550 donors—alumni, friends, foundations, staff, faculty, and former faculty—who contributed to 100 endowed scholarships and 310 annual scholarships. The scholarship endowment has grown from $3.18 million in 2010 to $10.35 million, an increase of 225 percent since 2010, providing a much firmer base for ongoing scholarship support for students. During the 2019-20 academic year, more than 600 scholarships were awarded to William Paterson students, with nearly $1.1 million in available scholarship funding.

Watch the virtual scholarship celebration via the link: https://bit.ly/WPscholarship