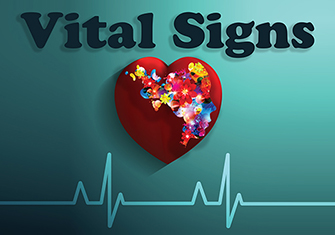 A cast of William Paterson students will present Vital Signs, a humorous and poignant collection of women's monologues by playwright Jane Martin, in a livestreamed performance from Shea Center on Friday, March 5, 2021 at 7:00 p.m. The show will be recorded for broadcast online, with viewings on YouTube scheduled for on March 12, 13, and 15 at 7 p.m., and March 14 at 3 p.m.

For tickets, go to: https://www.wpunj.edu/wppresents/university-theatre.html#vitalsigns

The show, a three-camera, “live capture” production performed in one take, has provided the students and their director, theater professor Elizabeth Stroppel, with the unique opportunity learn how to stage and act live for broadcast on television.

Stroppel, who directs student theatrical productions each year, began planning for the show during the summer of 2020 as she looked to find a play that might work in a virtual environment. “I attended an online conference, and saw many examples of shows that were coordinated on virtual screens that were successful,” she says. “But I still wanted to find a way to give my students a collaborative experience by filming it live.”

She settled on Vital Signs, with its focus on women and their life experiences. “The monologues tell a wide range of women’s stories—some are introspective, some are quirky, some are outlandish, and I thought this would work well for our students,” she says.

The student cast includes undergraduates Emilee Rodriguez, Jessica Moore, Bailey Stewart, and Paola Ruiz—who all enrolled in Stroppel’s Theater Performance Lab course last fall and this spring—and graduate student Jennifer Fiore. All the cast members worked individually with Stroppel throughout the semester using Zoom. “We all learned to adapt,” says Stroppel. “The one-on-one rehearsals with each student resulted in a much more in-depth and focused understanding of character creation.”

Originally scheduled for performances last November, the show was postponed as coronavirus cases started to increase and rescheduled for this spring. Rehearsals resumed in January, and Stroppel says the break gave the students some additional time “to filter the characters through their own lives and to create more connections and specifics for them.” The cast had just one week of in-person rehearsals to work on the physical action and props prior to the livestreamed filming.

Stroppel credits the Shea Center production team for their incredible support of the project. “As a faculty member who is used to directing for a live performance, this was all new to me. We had to learn how to tailor the performances for the camera, and our technical people are so knowledgeable,” she says. “Everyone has been incredibly helpful and supportive. It’s all about expanding your creativity.”